Serene Lake Wohlford lies near the headwaters of Escondido Creek, its mirroring surface reflecting the shaggy-with-chaparral, boulder-studded hillsides that confine it. As early as 1895, water impounded for the benefit of Escondido's farms and households began to collect behind a small dam here. The present, larger Wohlford Dam, completed in 1924, holds back a maximum 7100 acre feet of water -- not a lot, even by San Diego County standards. Much of the water that feeds Lake Wohlford today comes by way of the Escondido Canal, which originates at a point on the upper San Luis Rey River.

So long has the reservoir existed here that its presence has become an integral part of the scenery. In this post-El Niño period, the lake brims, and no bathtub ring of muddy ground interposes itself between the water level and the luxuriant growth of hillside vegetation.

Hikers (or rather casual walkers) can explore a short section of the lake's south shoreline. A narrow trail, primarily used for fishing access, winds for about half a mile amid dense growths of chaparral and coast live oak. Leafy curtains of poison oak drape the oak limbs, lending a Tolkienesque flair to the scene. It's quiet here on weekdays and a bit noisy on weekends with boat traffic on the lake and car traffic along the far shore. You can sit on benches or lie on a large rock slab by the shore, all the while watching the rippling lake surface or the activities of birds. (I witnessed several hawks exploding into flight over the crown of an oak tree.)

To reach Wohlford's lakeside trail, drive 1.9 miles up Lake Wohlford Road from Valley Center Road and turn right on Oakvale Road. Drive 0.7 mile to a gated dirt access road on the left, open during the daylight, which leads to the shore of the lake. One segment of the shoreline trail goes 0.2 mile west, while the other segment winds north for about 0.3 mile. 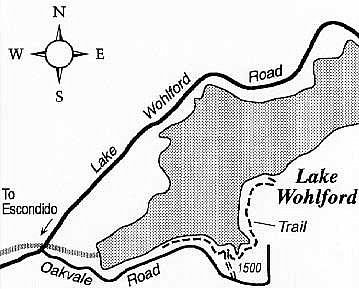