A loop through Fallbrook and De Luz challenges bicyclists.

The sinuously curving rural roads on the far (north) side of Fallbrook offer a significant challenge to bicycle riders. Twenty-five years ago, the brushy hills and wooded backcountry canyons between Fallbrook and Temecula were sparsely inhabited. Today, agribusiness and estate housing is taking over, with palatial homes dotting the avocado and citrus groves. Still, traffic in the area remains fairly light, and many of the oak-shaded canyons remain pristine. Observe the following directions to trace an almost-never-flat 26-mile tour of the area. Be sure to use a bike with a low set of gears and good brakes, and take along food and water for a minimum three-hour trek.

Start riding in Fallbrook by going north on Pico Avenue, north of Mission Road. Pico quickly becomes De Luz Road, and you coast down a twisting section of road in a shady ravine. At the bottom of the grade, veer left, staying on De Luz Road, which follows the Santa Margarita River. After a mile, you cross the river and begin a vigorous climb to a divide. Gliding down the other side, you dip into the first of the many small, shady ravines you'll cross or follow in the next few miles. Here and there, live oak trees arch overhead to form a cool canopy, penetrated only by slender shafts of sunlight. Elsewhere, out in the open, vistas south and west reveal the rugged mountains of Camp Pendleton's interior.

Some seven miles from Fallbrook, the road makes a decided curve to the north and starts following the east bank of De Luz Creek, a tributary of the Santa Margarita River. Presently, you come to a small cluster of old houses, which is De Luz proper. While De Luz is possibly the county's smallest community today, sufficient population in the late 1800s warranted the establishment of a post office here.

At the road fork just beyond De Luz, bear right on De Luz-Murrieta Road. The old De Luz schoolhouse stands on the right, with the brooding Santa Margarita Mountains forming a backdrop in the west, rising to elevations of over 3000 feet.

Ahead, the road climbs abruptly to pass over a saddle. Down the other side you join the bottom of Sandia Creek, another south-flowing tributary of the Santa Margarita River. Again, there is a delightful promenade of oak trees -- and more fords. Presently the road bends sharply right and ascends steeply for 0.6 mile to the intersection of Carancho Road. Turn right there, go 0.4 mile, and turn right on Prado Road. Continue for about 0.7 mile to a summit affording a good view of the surrounding area. Then descend to Sandia Creek Drive, where you turn right.

Ahead there's mostly downhill riding, and one significant climb -- a short but gut-busting effort followed by a hair-raising descent (keep your speed down). At the next major intersection, stay right, cross the Santa Margarita River, and then follow the river bank toward De Luz Road and the one-mile climb back to Fallbrook. 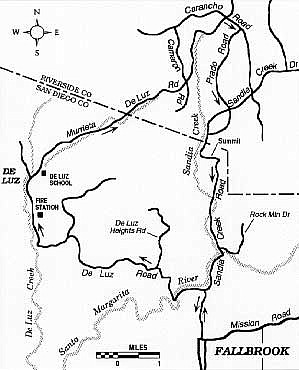