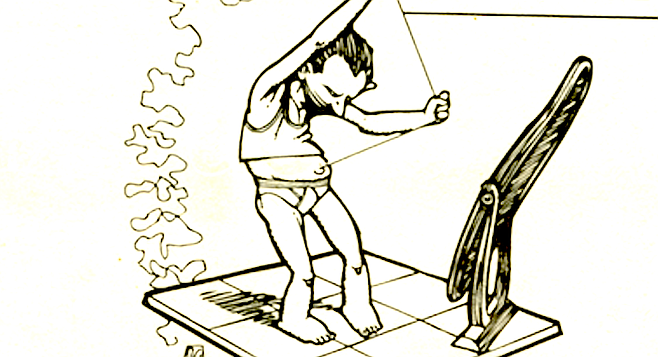 The amazing ability of a bellybutton to collect lint

Mystery of the giant blue balls

Dear Matthew Alice: My friend Shmed has one incredible navel. I discovered that his belly has the ability to not only collect abnormally large clumps of lint but also has enough savvy to process this lint into larger blue balls. A few years back we traveled together in Europe and spent many long hours on the Eurail, amazed when he could draw out blue lint ball after blue lint ball. Perhaps the strangest part of all this is that he gets these balls after wearing white shirts. He owns zero blue ones. How is this possible? Is there some sort of chemical stored in his bellybutton that causes a reaction?— Bellybutton Blues, Cardiff-by-the-Sea

Once again I say, no, I don’t make up these questions. I did make up this answer, though. Sheer speculation based on what little can be gleaned from scholarly navel literature. Your bellybutton is merely humorous scar tissue. Bellybutton “lint,” even in Shmed’s Guinness-caliber innie, is mostly old skin cells mixed with whatever else happens to roll in. So unless he’s Shmed the Smurf or he’s been hiding ballpoint pens in there, I’d guess the blue hue’s from his jeans or boxers. It wouldn’t take much fiber to give the contents a blue tinge, like vacuum cleaner lint (basically gray) tinted the color of your shag rug. Does Shmed have plans to recycle this stuff into wall insulation or mulch? A shame to waste it when so many outies go to bed at night lintless.