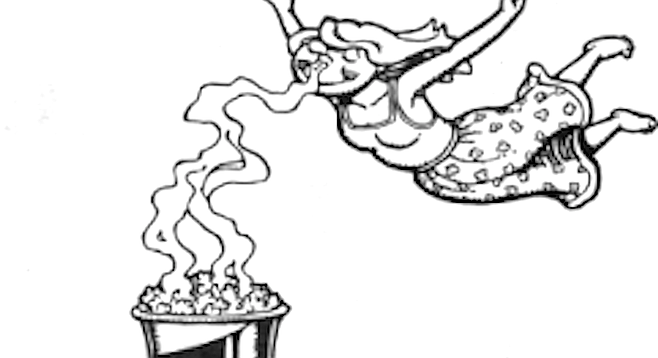 To Whom It May Concern: Why can the smell of popped popcorn, whether popped fresh or burnt, be smelled farther away than other foods? Is there a fact behind this question, or is it just a phenomenon — Jan Steudtel, San Diego

Oh, there are facts hidden everywhere. The place is crawling with them. They’re even in the smell of popcorn. Along with a little hucksterism. For something to produce a smell, the odor-bearing molecules have to vaporize. The faster they are dispersed, the stronger the smell. And the warmer and moister the environment, the more the scent will linger. So popcorn has a lot of things going for it. Corn pops when water in the kernel turns to steam and explodes the seed coat. So there’s your sudden release of odorants into a hot, damp environment. And as the corn pops, more and more of the scent is spewed out — for two minutes, three minutes, depending on how much corn you’ve got. The oil the corn’s popped in absorbs some of the scent, too. Popcorn is a regular nose fiesta.

But maybe you’re thinking about the smell of popcorn in a movie theater or a store. Long ago, chemists devised a fake popcorn odor that only needs heat to be released. Add a fan and a ventilation system and you have the perpetual scent of popcorn in the air. There’s even a fake bagel odor for bagel vendors to spew into the mall to lure in customers. In fact, the hottest trend in marketing these days is to tweak us into buying by appealing subliminally to our noses through scented printing ink, plastics, fabrics.... It’s all very sinister.

A few examples. A rocket manufacturer hyping its newest weapon placed an ad in a military journal, including a scent strip that smelled like gunpowder. A bank spritzed their auto loan brochures with a new-car smell. Scented slot machines at the Las Vegas Hilton made people spend more. And several collection agencies (not in the U.S.) impregnate their past-due notices with an odor found in male sweat. It worked. They’ve scared 17 percent more payoffs out of their mailing list with the smelly bills. One of the biggest fake-smell markets is the microwaved-food industry. Much of the “taste appeal” of those funky meals comes from fake odor (and color). And that includes nuked popcorn. Any buttery, “popcorny” smell that lingers after the corn has popped is all artificial. The topper, though, may be a Chicago scent-development lab that tested smells to see which got men hottest. The winner? Cinnamon buns, by a landslide. Pure erotica.