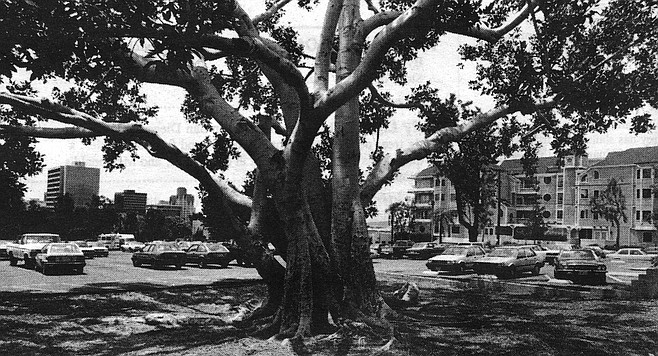 The Moreton fig at Grape and Third

The tree that saw tomorrow

The last vestige of the Florence Hotel, which opened in 1893 and was tom down in 1948, is the Moreton Bay Fig tree on Grape Street between Third and Fourth. The three-story hotel was built by Alonzo Horton’s brother-in-law and for many years was the epicenter of San Diego culture, but like so many of the city’s relics, it was replaced by a parking lot. The owner of the property in 1948, the Union-Tribune Publishing Company, had planned to construct a new newspaper plant on the block bounded by Third and Fourth avenues and Grape and Fir streets. But after the old hotel was leveled — it was called the Casa Loma at that time — the newspaper company decided to remain in the center of downtown. For as long as anyone can remember, the lot has harbored cars, as it does now for the nearby Harborview Medical Center. The fig tree, which was planted in 1895 as part of the hotel’s garden, became the city of San Diego’s Historical Site No. 53 in 1971.

Like many of San Diego’s heirlooms, the tree’s historical landmark designation did practically nothing to protect the tree. The Dallas-based owners of Harborview have all but ignored the tree’s health. The file on Historic Site No. 53 contains letters from the public and from city staffers complaining about the condition of the tree, imploring the hospital to do something. Years of drought and neglect led to a stunting of the tree’s growth as the thirsty roots searched beneath the asphalt parking lot for water. Vandals have defaced its intricate trunk with carved initials. A blackened section of the trunk facing the parking lot appears to mark an attempt at torching the tree. An old placard nailed to the trunk reads, “In Memorian [sic] Lt. Wilfred James Shield.” It is dangling by one edge, as if someone tried to tear it off.

Last month an arborist was finally hired to nurse the tree, one of only three mature local specimens of Ficus Macrophylla. (The other two are in Balboa Park, at Sixth and Laurel and behind the Natural History Museum.) Why the concern now? An attack of corporate conscience? Threats from radical tree lovers? Nope. The owners are trying to sell the land, and a potential buyer asked that a conditional-use permit be removed from the property.

The city decided that removing the conditional-use permit from the parking lot might bring about irreparable harm to the tree, should a developer get his hands on the property. So the city demanded special protection for the tree before the land is sold. Now a deed restriction, which contains an explicit list of requirements for caring for the tree, must be signed by any new owner before development is allowed. City staffers refer to the Moreton Bay Fig on Grape Street as the single most protected tree in town.

Tree specialist Bill Nelson has been retained to oversee the tree’s new fitness program. Although other arborists claim the tree can live another 100 years (in the tropics fig trees can live 1000 years; one related specimen in India is thought to be 5000 years old), Nelson believes it has only another 20 to 30 years left. He says the best way to maintain the tree is to establish a system of “absorbing roots” directly beneath the canopy, rather than allow them to remain out under the surrounding asphalt. He’s doing this through a regimen of watering, feeding, and mulching. In about nine months, the roots should be in good enough shape to sever them at the outer perimeter of the canopy, should a developer wish to excavate the site.

At last week’s meeting of the Historical Sites Board, most of the board lauded the recent work on the tree and the deed restriction that will ostensibly preserve it, but one member, Vonn-Marie May, made a remark that raised questions about the tree’s future. “We should realize that this is not protecting the tree, this is containing it,” May said. Ficus trees, with their propensity to send down air roots and keep growing indefinitely, will keep expanding under ideal conditions. In an interview after the meeting, May observed that the hospital is “trying to max the site out for any developer to build right up to the edge of the tree. This fig is probably a young adult that would keep getting bigger if it’s taken care of. What they’re really doing is locking it in a time warp.”