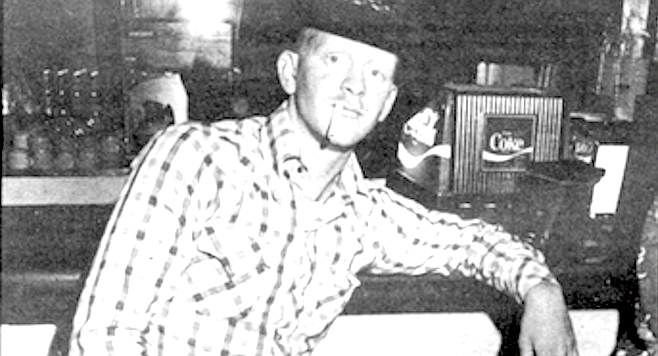 Oceanside is looking for a few good men

A town that preys on Marines

On paydays the route three bus from Camp Pendleton to Oceanside is jammed with marines. It leaves the base along Vandergrist Boulevard, then proceeds to the Mesa Marguerita housing area and North River Road, picking up young men, most of them under 25, seeking relief from the drudgery of military base life. 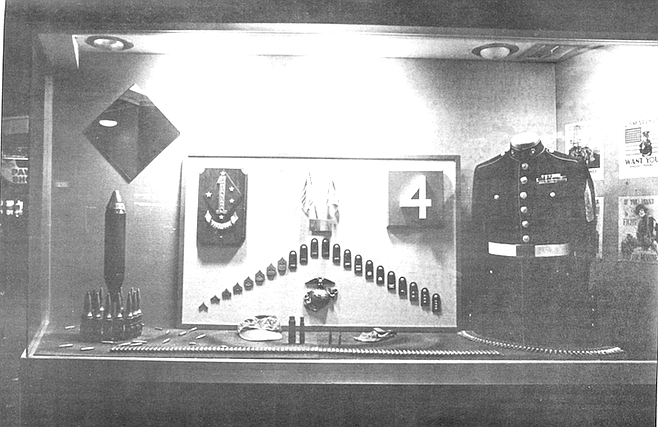 “Face it. Oceanside is the marine corps.”

They pour off the buses and engulf the main stop at Mission and Hill, their hair severely trimmed, their starched shirts tight at the collar, their wallets bulging.

The lucky ones, the marines with cars, cruise into nighttime Oceanside in their Pontiacs and Dodge Chargers, cutouts wide open and six-packs in the rear seat, the radios and cassette players blaring out the music of Rory Galagher or Tanya Tucker, Merle Haggard and Ernest Tubbs. 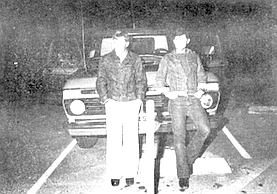 "These guys can get rowdy, but they don’t hurt anybody on purpose.”

Dividing into groups, they spread through the tenderloin of downtown on their way to the Sugar Shack, or Danny’s Hen House, or the Long-branch Saloon, or one of the 20 other taverns clustered in the community’s core. They scan the shop windows, movie marquees, and drugstore displays, remnants of the small towns, most of them southern, which they left to join the corps. 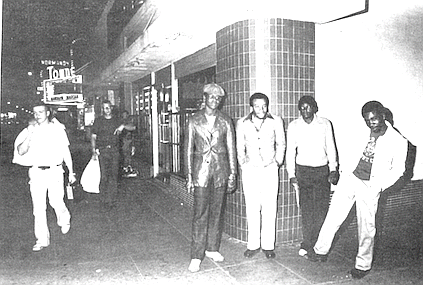 The blacks stay together; the whites walk with each other; the chicanos too.

Before the night is over, some of them will wind up in Tri-City Hospital’s emergency ward, bruised victims of muggers and jackrollers who converge regularly on Oceanside when servicemen come to town with their two-week’s pay. Others will end up in jail, charged with crimes ranging from simple misdemeanors to capital offenses. For the beleaguered little town of Oceanside, payday at the base is a mixed blessing. 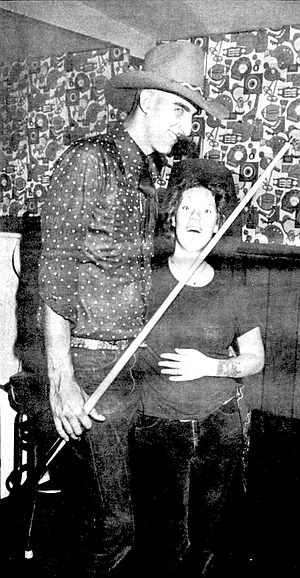 "Somehow, these new marines are different."

Of the crimes committed in Oceanside, 30 percent are attributable to the Camp Pendleton marine base, according to a spokesman for the Oceanside Police Department. In 1974 it was more than 40 percent. That simple fact, combined with the general air of urban decay which blights the downtown section, has led to the city’s reputation of toughness and casual violence; an open town where the good ol’ boys serving their country whoop it up on weekends.

They come from places like Smith Center, Kansas; Metairie, Louisiana; Sebastian, Florida; and Parchman, Mississippi. They amble through the night air of downtown Oceanside in four- and five-man groups appearing, like Nately’s whore, magically and simultaneously on street corners, in tavern doorways, and theatre lobbies, their taut bodies exuding a restlessness. an angst, a kind of low-grade hysteria which suffuses the very air they breathe and raises danger signals to the local merchant.

The aimlessness of youths away from home for the first time is nearly tangible. The enlisted men shuffle from Hill to Tremont Street, from Tremont to Mission, from Mission to Third on up to Sixth, and from there all the way to Carlsbad. They’re looking for a good time— they’re not hostile, not forbidding. But their very numbers suggest a certain mobile aggressiveness and conjure up visions of the home front during World War II.

“I think we come down here just to let it out,” says a 20-year-old recruit waiting for a bus back to the base. "All these guys just want to get off Pendleton, get somewhere different. We drink a little and bullshit and look around to see what’s going on. A lot of these guys get into trouble, but they aren’t the ones that start it; someone is always trying to rip you off or lay a line on you—like the bar owners. You walk into a bar in your uniform and they see dollar signs. That’s all—dollar signs.” Mike, a lean, spectacled, 19-year-old private, sits alone at the Play Girl, a kind of tennybopper go-go bar which offers topless dancing and soft drinks to marine youths who inhabit that netherworld between 18 and 21 years of age. On stage, illuminated by red and white floodlights, a horsy, buxom brunette prances to Lou Rawls’ “Daddy Was a Rolling Stone.”

“Who the hell wants to stay at the barracks when you’ve got a chance to get away?" he says, his voice rising above the driving, distorted music. “We all come into town here on the weekends; it helps you forget the stuff that’s going down up at the base. Everyone just wants to relax. These guys can get rowdy,” he says, motioning to three soldiers playing rotation at the pool table, “but they don’t hurt anybody on purpose.” Still, he knows the town can be rough. Sticking with buddies, he says, is necessary. “It’s protection, man. You stay with your friends. The blacks stay together; the whites walk with each other; the chicanos too. Nobody walks alone around Oceanside at night—not even a marine.”

With the sharks come the pilot fish. “On payday night, people come from 300 miles away to prey on these guys,” a policeman says. “They arrive here from San Diego, L.A., Bakersfield, Santa Barbara, even San Francisco. Camp Pendleton payday is famous throughout California.”

Camp Pendleton’s Major General Carl W. Hoffman agrees. “Military personnel in this area must be protected from business establishments which harbor prostitutes, cater to homosexuals, or profit from filth and immorality,” he said in a statement issued to media during a recent crime wave in Oceanside. “This base has been furnishing the victims for such businesses and for the scoundrels and perverts these businesses draw to the area.”

Oceanside Police Sergeant George Cramer says the overall crime rate last year (5,185 separate incidents) is down more than three percent from 1975. But these figures can be deceptive. The murder rate doubled and assaults jumped 26 percent. A sharp decline, however, was recorded in rapes (down about 25 percent), largely the result of the crime-control unit which now patrols downtown Oceanside in search of street crime. “But whether Camp Pendleton was up there or not, we'd still have crime problems here,” Cramer says. “If the base was gone, Oceanside wouldn't just be a sleepy little village. We still have a lot of transients.”

Oceanside is schizophrenic. During the day the town is generally sun-kissed and amenable, albeit tawdry, with its bustling, shop-filled core, its cool breeze, and the rustic pier (itself a tenacious monument to determination and post-World War II craftsmanship). Oceanside tantalizes the California vacationer with what appears to be a gentle welcome. It seems extended to all the motorist from Bellflower on his way to Tijuana, the San Diego-bound hitchhiker, or the marine on leave.

But with nightfall the scene changes, the eight-square-block downtown section looks like wartime Honolulu as uniformed soldiers saunter from bar to movie house to arcade.

“Sure it’s bad down there," says one resident, a former employee of the Oceanside Transportation Department. “But you’ve got to put this all in perspective. You're talking about a four-block area in a city of 50 square miles. I mean, you don’t have to come to downtown Oceanside. There are a lot of other places you can go to at night.”

“Listen.” he adds, “you can’t apply middle-class, Midwestern standards to downtown Oceanside. It’s impossible. I grew up in Stockton and it was just as tough there. We had a lot of migrants, a lot of transients, and all kinds of service people.”

In 1973 Oceanside gained nationwide notoriety when its murder rate equalled that of New York City. But then, 1973 was a bad year all around for Oceanside. On July Fourth rioters romped through the downtown pier area, injuring police and each other with bricks, sticks, and other festive weaponry. “W'c almost lost the town.” Roll Henze, then deputy police chief, later told the city council. The police department. once modest and unobtrusive, has a new, high profile. The lighted window of the new sub-station at Third and Tremont has become a city landmark. The store-front offices have been established in high crime areas in hopes of cooling the violence and projecting the image of a strong police presence.

“With all these lights on and with the blinds up, we make quite a target,” said an officer at the downtown sub-station late one Friday night. ”We’re just waiting for the night when some guy drives by and takes a blast at us with his shotgun...but we’re supposed to be visible.”

“In some ways, the marines have changed.” says Councilwoman Lucy Chavez. “1 think they are a different type than the ones that came here during the war. At that time the marines dated our daughters and were invited into our homes. A lot of them eventually stayed and became part of the community. But not now.”

Another woman, a homeowner in the suburban Firemountain section, agrees. “I don't think the standards are the same. The guys that used to be in the marines, the enlisted men, were serving their time for their country, but they left the corps later to go on to other jobs. They were all over Oceanside during the war and it seems to me we all got along fine. But somehow, these new marines are different. Maybe it’s the same all through the military. The kids go in now because they can’t get work anywhere else. The service isn’t a jumping off place, it’s a place where they end up.”

Some of the marines joined up to see the world—as the saying goes— and several said they had been promised by recruiters they could get the vocational training of their choice in addition to choosing where they would be stationed.

“Yeah, that’s what they told me— can you believe that?” said a black youth at the Continental Bus Depot on Tremont. A group of six black marines, listening, laughed and nodded their heads. They were waiting for a bus to San Diego. “That guy told me everything—said I could go where I wanted and learn welding.

“So I joined up...man! My dad was in—I’ve written home to him and he said it was nothing like it is now. It’s just busy work, that’s what everyone says.”

For long-time Oceanside residents, the past can be particularly bittersweet, an ethereal memory from which old troubles have been expunged.

“This was a good town,” a downtown theater manager says wistfully, “but the government here doesn’t know how to plan anything at all. Look at Carlsbad. They know how to make a plan and stick to it. Oceanside and Carlsbad are right next to each other, but they are as different as night and day. You go into Carlsbad from Oceanside and it’s like entering a dream world.” Carlsbad has become what Oceanside might have been. The community is almost Germanically well-oriented, reasonably crime-free. and relaxed, with a citizenry that has developed a good-natured condescension towards its northern neighbor. Douglas, the former policeman, was required to live in Oceanside when he was on the force.

He moved to Carlsbad the very day residency laws were changed. Eventually he quit and now works as a private investigator. He doesn’t miss Oceanside. “Carlsbad is classic. They get their money and they spend it wisely. It says a whole hell of a lot for city government. They rigidly control everything; the planning ordinances are strictly enforced. I mean, this town is really a nice place in which to live. You can’t even compare it to Oceanside.

“Oceanside, really, is so strange. For example, the only people with beards and long hair downtown at night are either narcs or misplaced hitchhikers. If a narcotics officer really wanted to be effective, he’d shave his head, get some Super Fly clothes, and wander around Sixth and Hill like a screwball.”