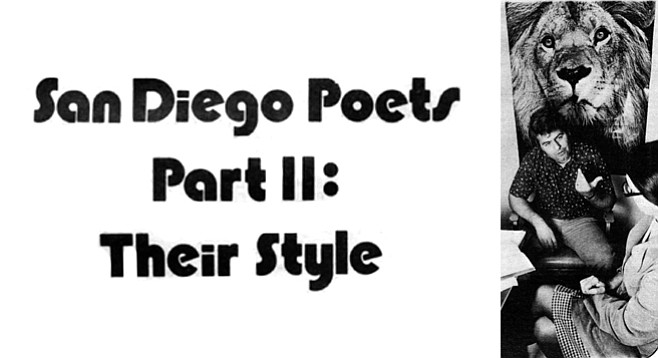 The influence of Philip Levine and Charles Bukowski

(ED. Because of space considerations, Michael Davidson’s comments on the style of San Diego poets had to be carried over to this week’s issue.)

It would be difficult to characterize a San Diego “style" in poetry, although there are obvious influences. The fact of Glover Davis’ position as an influential teacher has added a vigorous depth of image to much of the writing centered around State University. The influence of poets such as Philip Levine, Robert Mezey and, in the further distance. W. S. Merwin, Galway Kinnell and James Wright can be felt. It is a poetry of heightened image and self-declaration. Personal experience becomes the focus, its potentialities at times approaching a revelatory or cosmic size. 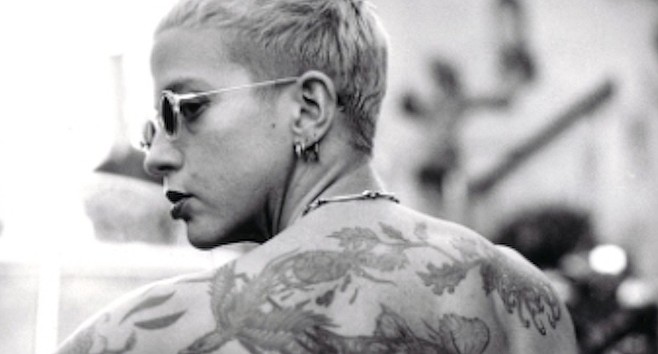 Kathy Acker's work involves personal testament mixed with projections of certain personae so that private and public boundaries are blurred.

The sense of mythic or heroic confessionalism also pervades work written in the area. Among many of the women poets who are attempting to define a poetics in their own terms, there is an attempt to re-write myth according to individual dream experience, vision and a sense of shared community. In a poem by Barbara Mov, there is an identification with primitive and cthonic powers:

i came to the sacrifice

i cried and howled

and the forests broke open

In addition to the role of myth and ritualistic language, the influence of confessionalism in its more recognizable form is prevalent, particularly that of k Anne Sexton, Sylvia Plath and Adrienne Rich.

The writing in and around UCSD, however, is of a rather different order. Poetry becomes a propositional mode, its form discovered in the act of writing (or in David Antin’s case, in the act of talking). The work of Melvin Feilicher or Kathy Acker involves personal testament mixed with projections of certain personae so that private and public boundaries are blurred. The latter’s “I Dreamt I Was A Nymphomaniac” is an artful mixture of sexual fantasy and flat, descriptive narrative. The tension enacted between the two creates extremely funny moments. A highly symbolic or metaphoric language is dropped in favor of a narrative, almost conversational style. Chance factors are allowed into the writing and the nature of “person” is revealed in dialogue or monologue rather than through a series of discrete images. Of influences, one might recognize a more international style: Mayakofsky, Raymond Roussel. John Cage, the surrealism of Breton or Max Jacob, the lengthy meditations of John Ashberry.

It should be added that among certain poets in the area there is a strong interest in the California-Western tradition from poets like Gary Snyder, Philip Whalen, James Roller and Robert Bly — a naturalistic poetry with the full charge of mythic potential lying beneath the surface. And there are a number of poets, notably those printing through Suntemples and Inca Press, in whose voices one finds the presence of the Los Angeles “school” — that surrounding Charles Bukowski. This is also a highly personalist-confessional mode mixed with a wry and at times biting humor.

But these distinctions are only tentative marks, and it would be foolish to assume a consistent poetic voice. If one could specify a distinction between poetries in the area it would probably be that between a poetics of image and self-declaration versus a poetics of “operations” or formalistic exploration. There can also be seen an experimentation in the world of prose poetry as distinct from the ‘finely crafted’ poem in recognizable stanzaic units. But these distinctions are not hard and fast and if demographic and topographic features contribute to this diffusion, then we are all the more fortunate.