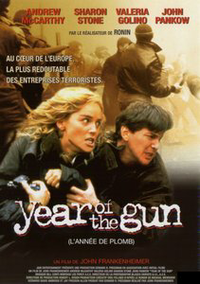 It's gonna be like Day of the Jackal, General De Gaulle mixed up with fictional characters. Thus the journalist hero describes his secret writing project. The description fits the movie around him as well, except it's former Prime Minister Aldo Moro mixed up with fictional Italian terrorists in the year 1978. The plot is chockablock with cheap surprises; and John Frankenheimer's warmed-over Orson Wellesisms — rather lukewarm really — make it watchable. Andrew McCarthy, Valeria Golino, Sharon Stone, John Pankow. 1991.