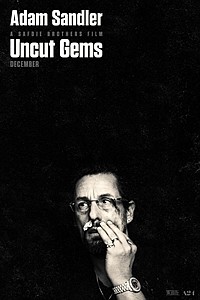 Howard Ratner’s (Adam Sandler) day is consumed with robbing Peter to pawn to Paul. His life is a constant juggling act, his desperate ploy a complex series of bets involving a multitude of moving parts. If he can distract his clients long enough to keep afloat everything, the rewards could top over a million. Howard is based on a real-life character who worked alongside directors Josh and Benny Safdie’s dad in the Diamond District back in the day. There’s much scuzzy fun to be had, but nothing tops a moment of unexpected sensuality between married Howard a his younger secretary/mistress (Julia Fox in a blistering debut). Pretending that he’s in a cab, Howard hides in the closet, sexting Julia as he watches her prepare for his arrival. For a brief moment, we’re granted full access to Howard’s charisma; we understand what drove the directors to fashion an entire feature around him. And while the Safdies aren’t able to shake all the obvious tropes — dangling a character head first out a window, a gag involving a file and a security door, etc. — their vision is singular enough to keep it interesting up until the ending…well, just ends. 2019.