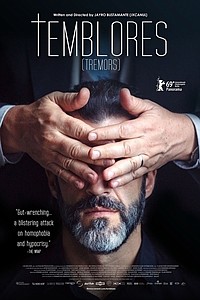 Pablo (Juan Pablo Olyslager), an Evangelical Christian and father of two, was recently outed by his family. “You thought being a faggot would be easy?” asks his lover. “We’re not in Luxembourg.” Try Homophobiaville, a Guatemalan burg where everyone knows everyone else’s business. It’s a cliche that filmmaker Jayro Bustamante puts to good use. Unlike its conversion therapy-bashing American counterparts (The Miseducation of Cameron Post, Boy Interrupted), Temblores is more than just a statement of the obvious. His script actually encourages the most unlikely set of characters to intermingle. It’s one of those rare films in which each player, no matter how seemingly insignificant, is given their moment to contribute to the complexity. Pablo and the father of his young daughter’s best friend share the same brand of aftershave. Missing him terribly, and looking to reclaim a piece of the relationship, the girl pockets the bottle. Bustamante has a knack for dreaming up layered characters right before our eyes, but even that can’t get us through the last half-hour where Pablo, inspired by Pastora (Sabrina De La Hoz), an Exorcist in Cruella De Vil clothing, consents to the “cure.” 2019.

In other words,it at least makes an attempt at some complexity, UNLIKE its simplistic sloganeering Hollywood counterparts.