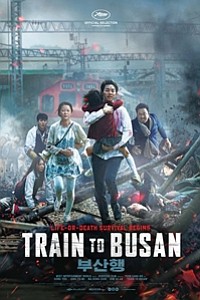 A self-centered fund manager (Yoo Gong) learns what it takes to be a good father during a South Korean zombie outbreak in this terrific, mostly trainbound thriller. It starts, unsurprisingly, with getting over that “self-centered” bit and paying attention: to your kid, to your mom, to your fellow passengers — really, to anything and everything beyond the bottom line. If only all morality tales and class-struggle allegories could be this bloody and moving (in every sense) — just try not to chuckle when the zombie virus animates its first victim (a deer run over by a pig farmer who is having the worst day ever), not to seethe when the bastards start trampling the innocent, not to cringe when the undead claim beloved characters, and not to tear up at the increasingly frequent moments of heroic sacrifice. Director Yeon Sang-ho makes smart use of the cramped quarters, and while it’s true that his zombies’ abilities tend to vary according to the requirements of the moment, it’s easy to overlook amid the onslaught of action and emotion. 2016.