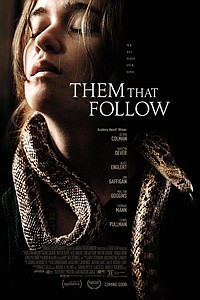 Co-writers and co-directors Britt Poulton and Dan Madison Savage make a movie about religious believers that has the decency to take its subjects seriously even as it casts a critical eye toward faith-based communities in general and snake handling in particular. (But boy howdy, do the serpents ever serve a fine cinematic purpose: visual proofs of invisible things: faith, forgiveness, and the danger to self that makes it “a fearful thing to fall into the hands of the living God.”) It also has the intelligence to leave questions about the truth of the beliefs aside, and instead focus on the believers — in particular Mara (Alice Englert), who finds herself in the age-old predicament of wanting to marry a good Christian fella but loving a skeptical bad boy. And in other age-old predicaments as well — the film opens with her discovery of a maternal snake den before moving on to her sly acquisition of a pregnancy test. But as hard as the makers work to draw the outsider in to their Appalachian retreat — rich atmosphere, richer casting — Joe Secular may find it hard to bring himself to care about folks who seem more than a little like crazy cultists. The movie works on its own terms, and love vs. duty is hardly a sectarian theme, but the suspension of disbelief may be a tricky business here. 2019.