The Sound of Silence 2.0 stars 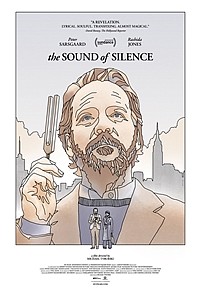 In telling the story of a “room tuner,” director and co-writer Michael Tyburski keeps things, fittingly enough, quiet. Even its most impassioned moments avoid the raised voice and, with one sad and telling exception, the dramatic gesture. Or perhaps “muted” is a better word, given the emotions that roil beneath lead Peter Sarsgaard’s strained expression, and the film’s shadowed palette of New York City’s grays and browns, (A tiny red tag on a map, pinned there to mark an anomaly, practically blares forth from the screen.) Or maybe even “muffled” — the viewer is asked to pay close attention, to catch after things that might easily be missed: a personal history suggested by a misheard question, the promise of a steady green light. Sarsgaard plays Peter Lucian, a man whose success in helping people live better through sonic harmony is intriguing enough to merit a piece in The New Yorker, but whose “passionate amateur” research into the larger implications of his work can’t catch the attention of the right people. (Read: the academic community, as opposed to grubby capitalists who just want to package his genius and sell it to the masses.) Lucian is a man with a theory, desperate to extrapolate from what he knows is true to what it might imply, and if you’ve ever known such a man, you will likely appreciate Sarsgaard’s performance. And you will likely be grateful for the aforementioned anomaly, arriving in the person of an exhausted woman (Rashida Jones) who cares enough to challenge his conclusions without dismissing him outright. 2019.