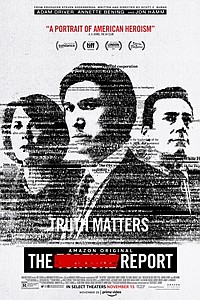 Scott Z. Burns, Bourne Ultimatum co-scripter and regular Steven Soderbergh scribe (The Informant, Contagion), makes his theatrical directorial debut. Like a well-intentioned family hiding the cancer diagnosis from a dying uncle, this justly paranoid thriller brings to light just how little truth is shared with the American public. Remember this film the next time you find yourself talking back to your favorite cable news provider. At a time when the Bush crime family was doing its best to drown out talk of waterboarding as a torturous, ineffective means of getting at the truth, the only viewer to have all the answers was Dan Jones (Adam Driver). A resolute idealist, the former United States Senate investigator spent 5 years working up a report the government would rather we didn’t see. But a film as thought-provoking as this should pack more thrills; the majority of the suspense is generated from Driver’s countenance, not Burns’ ability to captivate an audience. A lot of familiar faces turn up as equally recognizable politicians with none better than Ted Levine as former CIA-hole John Brennan. 2019.