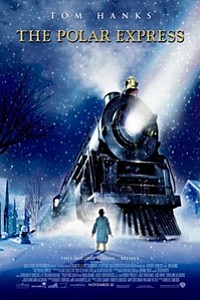 Neither an "instant classic" nor the polar opposite, but a middling addition to the holiday repertoire: computerized illustrations of the Chris Van Allsburg children's book about a little boy already too old to believe in Santa ("This is your crucial year"), snatched out of his bed on Christmas Eve for a faith-restoring train trip to the North Pole. Is seeing believing? — or vice versa? (The answer to the explicit question, "Could this be nothing but a dream?," is a firm "No!") The fundamental animation technique of drawing on top of live-action figures — as in Ralph Bakshi's version of The Lord of the Rings, for example — is nothing new, but it has never looked quite like this: a mobile billboard or magazine ad airbrushed to the thickness of cake frosting, giving the image a velvety, mossy, furry, peach-fuzzy feel. Filmmaker Robert Zemeckis, who really did foment a revolution in animation in Who Framed Roger Rabbit, does not now appear likely to repeat the feat. But only time will tell. (Maybe when computer-generated touch-ups have become as commonplace in Hollywood as cosmetic surgery, we'll look back on The Polar Express as the breakthrough.) There are some marvelous sights on parade -- the ghostly first appearance of the choo-choo out of a clearing cloud of steam and swirling snow; the wind-borne ticket that returns to its holder via a relay network of a pack of wolves, an eagle, a rolling snowball, etc.; the perilous slog over the top of the railcars against a relentless salvo of blinding snowflakes; the train snaking across an ice-covered track; the red-brick Victorian architecture of the Pole — but these, without exception, are significantly liberated from the live actors. They are free-hand animation. The recognizable face of Tom Hanks, behind a walrus mustache and half-moon glasses, in the part of the train conductor and chief proselytizer for childlike credulity, is something of a distraction — a disruption in the cartoon universe — in the same way that an overly recognizable voice can be a distraction (Robin Williams in Aladdin, Eddie Murphy in Shrek, Albert Brooks and Ellen DeGeneres in Finding Nemo — name your own). But Hanks's voice, in a handful of other roles besides that of the conductor, almost as though he alone were reading the Van Allsburg text for audiotape, has been sufficiently disguised or electronically altered to be no more than a minimal distraction. 2004.