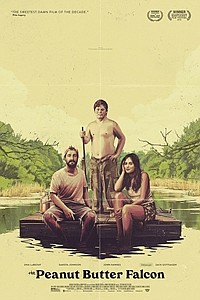 Writer-directors Tyler Nilson and Michael Schwartz team up to bring you what is quite possibly the feel-good movie of the year, for good and ill. The good part has a lot to do with the deep sweetness and natural ease between leads Shia LaBouef and Zack Gottsagen, two unlucky souls who have kicked the proverbial hornet’s nest and now find themselves on the lam in one another’s company, headed south through North Carolina’s Pamlico Sound. It seems LaBouef’s Tyler has let his grief get the better of him, while Gottsagen’s Zak has gone and busted out of the joint — that is, the nursing home where he’s been stuck by the state, since they don’t know where else to put an abandoned Down Syndrome person. The ill part has more to do with the story, which manages to hold the line between Southern-fried fairy tale and outright fantasy right up until the climax. Before our hero’s big final battle, the just-right look and feel of things is enough to cover over the happy coincidences, the overdone bits of dialogue (“While you’ve been looking at your charts, we’ve been doing a thing called living life”), the cornpone side characters. Afterwards...well, if you’re feeling good enough, it may not matter much. 2019.