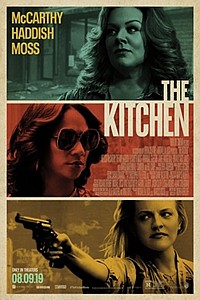 Writer-director Andrea Berloff, working from a graphic novel by Ollie Masters, knows the story she wants to tell: one of sisters doing it for themselves and sticking it to the Man. And she has the tools to tell it in stars Melissa McCarthy, Tiffany Haddish, and Elisabeth Moss. She even has a solid setting: New York’s mobbed-up Hell’s Kitchen of the late ‘70s (the title thus becomes a cleverish play on “A woman’s place is in...”). But what she doesn’t seem to have is much of an idea of how to tell it. At the outset, our heroines — and they are offered as heroines here, no matter how heinous their behavior eventually becomes — find themselves in a bind: their Irish gangster husbands have been sent away for three years, and the new guy in charge won’t even cover their rent in the meantime. But it turns out he’s also not great at providing the protection that the neighborhood shops are paying for, so the ladies step in to take over his operation. — and then some. What follows is a weird little fantasy that seems uninterested in anything but empowerment by any means necessary. (The line “You do what you have to do” is dutifully uttered near the end.) The direction is flat (actors taking turns speaking their lines instead of actually conversing, etc.), the characterization baffling, the plot mechanics incredible — as in, not to be believed. 2019.