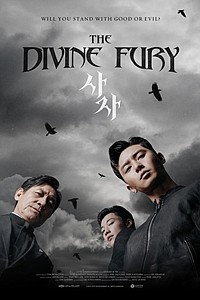 There aren’t many surprises in writer-director Jason Kim’s South Korean exorcist story. (Though maybe that should read “super-exorcist,” given the fact that our reluctant hero is an MMA champion whose demon-driving abilities come not from fervent faith, but from a mysterious manifestation of the stigmata in his unbelieving right hand. Which, to be fair, counts as a surprise.) Satan’s minions still operate by deceitfully preying on human weakness, still love to corrupt innocence, still love to climb the walls. Holy priests still rely on Latin prayers, dogged persistence, and personal sacrifice to accomplish their good works. But what surprises there are are mostly of the pleasant variety, starting with the tone of intelligent sincerity alongside the glowing red pupils and projectile vomiting. It’s almost enough to keep the viewer from smiling when the old-timer sent by the Vatican talks of a Dark Bishop sacrificing souls to gain power. Continuing with the clean, clear direction amid the shadows and (mostly practical) special effects. (When the MMA skills displayed in the first act finally figure into the spiritual combat, Kim boldly relies on mid-range shots for much of the action.) And finishing with the film’s insistence on first and foremost telling a story of faith lost and gradually regained — for our hero, the existence of demons does not de facto indicate the existence of God — instead of a story about priests vs. devils. Though that last one does result in a few more scenes of thoughtful conversation than the film can effectively bear. Still, if you can give yourself to its groove, it will likely not disappoint. 2019.