The Death of Dick Long 4.0 stars 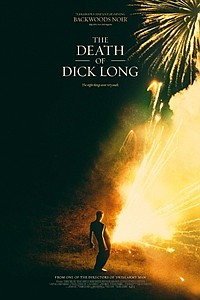 Don’t let the title put you off; it is an ultramasculine comedy, just not the pointless, “gross out” sort to which we’ve grown accustomed. When Dick suggested that he and his bandmates “get weird,” he had no idea that in the time it took for the credits to roll, he’d go from garage practice to backyard shooting gallery to just outside the ER, where his sexually assaulted corpse is anonymously abandoned by pals Zeke (Michael Abbott Jr.) and Earl (Andre Hyland). It’s very difficult to make cretins credible, let alone compassion-worthy, but the actors get lost in the characters here, while director Daniel Scheinert and screenwriter Billy Chew make it a point to not condescend. Except for occasional Tarantino-esque pop culture asides and a brazenly obvious lift from Psycho, the mood was never broken, and the reveal of the murder weapon hits like a kick to the groin of machismo — reminiscent of the “Squeal like a pig!” sequence in Deliverance. In a heartbeat, tears of laughter washed away the shock and disbelief. You may not like where the movie takes you, but damn if you won’t enjoy the ride. 2019.