The Catcher Was A Spy 3.0 stars 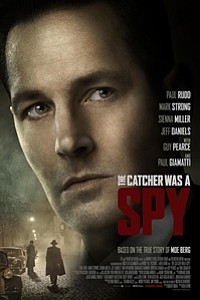 In times past, a typical sports figure could expect to live out his remaining years as a casino greeter or car salesman. But sometimes, Uncle Sam has other plans: the O.S.S. assigned Boston Red Sox catcher Moe Berg (Paul Rudd) the task of assassinating Werner Heisenberg (Mark Strong), the man commissioned by the Nazis to create Germany’s first atomic bomb. As hard as it may be at times, I’ve always been in Rudd’s corner. Let him pad his own retirement with as many ‘ant’ pictures as possible, so long as, in return, he rewards film lovers with an occasional low budget, well-engineered genre picture. In Moe Berg, Rudd helps director Ben Lewin (Paperback Writer, The Sessions) add another unforgettable passive hero to the his increasing menagerie. He heads a spectacular ensemble cast that takes full advantage of the talents of Jeff Daniels, Sienna Miller, Tom Wilkinson, Giancarlo Giannini, Guy Pearce, and Paul Giamatti. 2018.