The Big Parade None stars 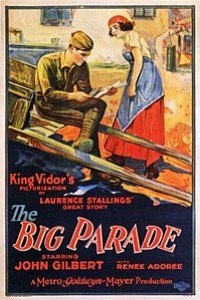 “What a thing is patriotism! We go for years not knowing we have it. Suddenly...it becomes life’s greatest emotion.” The words ring as true today as when they did when they were written, over 90 years ago. Assigned to a title card, the sentiment opens King Vidor’s 1925 epic silent. The story couldn’t be simpler, the execution anything but. An idle playboy, caught up in the patriotic fervor of World War I, enlists, only to find himself fighting alongside the common clay. For the first 80 of its 151 minutes, The Big Parade marches to the tune of a romantic service comedy. He’s off cheating with a mademoiselle, while the girl he left behind has fallen for his best friend. It isn’t until the battle begins that the film earns its reputation for being the first to portray the horrors of war in a realistic light. The combat sequences are nothing short of spectacular. For those unaware of a cinema before CGI, those are extras made of flesh and blood, not pixels, and actual aircraft, not toy miniatures or computerized counterfeits, whizzing overhead. 1925.