The Art of Self Defense 3.0 stars 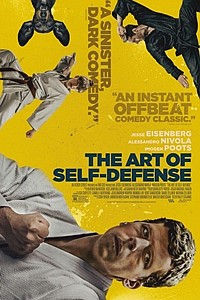 A nasty little triumph. It’s tempting to imagine that writer-director Riley Stearns caught a screening of the supremely feel-good The Karate Kid and thought, “Yeah, I can make the opposite of that.” Jesse Eisenberg stars as Casey Davies, a man whose slight build echoes Kid star Ralph Macchio, but who is in nearly every other respect his negative: pale, stiff, charmless, and, after suffering a brutal beating by a gang of bullies, consumed with the idea of not simply being able to defend himself against intimidating men, but actually becoming one of them. And hey howdy: there happens to be a dojo in his drab little town run by a sensei (Alessandro Nivola, sublimely serious) who is more than happy to help him on his way. There are perhaps a few too many foot-punches thrown at toxic (read: utterly childish) notions of masculinity — the sillier sallies (learn German, not French) blunt the effect of the more devastating blows. And they are devastating. There are plenty of moments where the laughter is sparked by dry absurdity (Imogen Poots noting that the ladies’ changing room “is exactly like the men’s changing room, except smaller and not as nice”), but there are others where it may erupt out of a kind of embarrassed horror at the proceedings. 2019.