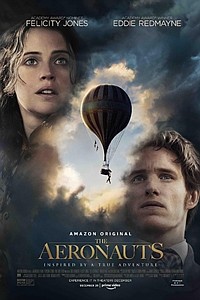 Inspired by true events? For all the truth the opening title card contains, it might just as well have read, “Insipid by All Accounts.” Wasn’t it John Ford who said, “When the legend becomes fact, print any excuse imaginable to reunite Felicity Jones and Eddie Redmayne in the hope of rekindling the box office success of The Theory of Everything?” There was no Amelia Wren. It was two male aeronauts — not a guy/gal pair of barnstorming chipmunks looking for romance — who piloted the historic gas balloon flight. Whenever the script calls for a flashback to play out on good old terra firma, rest assured that it lands with a resounding thud. The first hit of airborne turbulence sets the stage for a spectacular sequence of soaring unrest as the effects crew plays hacky-sack with the runaway balloon and its passengers. But once the storm passes, the reality of being stuck spending the remaining 90 minutes with two actors and a green screen sets in. 2019.