The 100 Year-Old Man Who Climbed Out the Window and Disappeared 0.0 stars 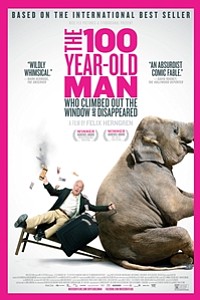 Proof that the intellectually challenged are fun to watch even with subtitles. Commence with a dead cat, an overly-latexed actor buried beneath more wrinkles than a kennel filled with shar-peis, and a neck-breaking 20x1 zoom. It only gets clumsier. At his current age, our titular centenarian (Robert Gustafsson) flees a nursing home and haphazardly takes possession of a suitcase filled with mob millions. Flashbacks to youth expose a munitions nut — institutionalized at a young age for accidentally detonating one of the locals — whose lifelong fascination with explosives positions him at the sides of everyone from Franco and Stalin to Robert Oppenheimer, for whom he acted as key advisor on the Manhattan Project. Presented by Buena Vista International aka Disney, this Swedish-language import is banking on Garp and Gump groupies to gobble another goopy assemblage of happenstance and madness as a cheery metaphor for eternal happiness. Phooey! Felix Herngren directs. 2013.