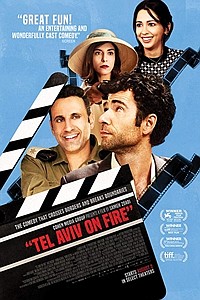 A Palestinian producer throws his regularly unemployed nephew Salam (the exceedingly low key Kais Nashif) a bone, in the form of a low-paying production assistant’s job on TV’s highest rated show, a nighttime soap set three months before the Six-Day War. All the dirty looks Salam scores from the head writer prove to have been worth enduring when he’s promoted to take her place. Only trouble is, he’s never written so much as a letter to Santa. Fate intervenes in the form of a prolonged stopover at a military checkpoint that puts Salam in touch with his future ghostwriting partner, a captain in the Israeli army (Yaniv Biton) who complains the show’s depiction of the military is inaccurate. Director and co-writer Sameh Zoabi safely follows the Jerry Lewis formula — watch as the unqualified schmuck slaloms past every obstacle thrown in his path. Alas, the potential for sharp political satire takes a back seat to small screen spoofery, nudging this more in the direction of Soapdish, rather than Joe Dante’s transcendent The Second Civil War. 2018.