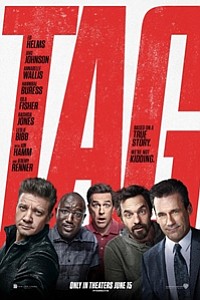 Just awful story of arrested development mistaken for preserved youth. Clips of the real-life game of grownup tag between friends that served as inspiration here are shown at the end, and have the no-doubt unintended effect of revealing what is missing in director Jeff Tomsic’s take: joy, friendship, humanity, and a sense of play. Maybe the parade of exxxtreme hijinks would be better enjoyed under the influence of something that would numb the horror, or at least keep you from hopping off the bus driven by this band of Unmerry Pranksters for a little longer. (Next stop, waterboarding?) The cast — dry Jon Hamm, frantic Ed Helms, bemused Hannibal Burress, chill Jake Johnson, and psycho-intense Jeremy Renner, plus Isla Fisher in full female force — is talented and game. But the game itself is grotesque, largely because of the characters they’re forced to play. 2018.

What a terrible, terrible movie review. The fact that this guy was hired as a “movie critic” is an embarrassment to the profession.