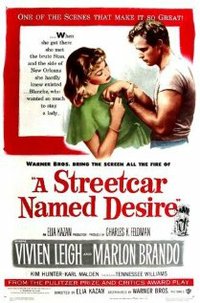 The delicacies of the Production Code, circa 1951, combined with the oily insinuations of Tennessee Williams, do not make it entirely clear what deep, dark secrets are hidden behind Blanche Du Bois's self-delusions, lies, and twittering airs. With nowhere else to turn in this cruel world, Blanche pays a visit to her brother-in-law's New Orleans hovel, and he proves to be the worst possible host for a dreamy, chattery Southern belle. He, Stanley Kowalski, has a prideful sensitivity about his heritage (Polish, not Polack, thank you), but he models his behavior on his more distant ancestors, the baboons. Marlon Brando, the only cast member not to receive an Oscar for this movie, makes some great, abrasive comedy out of his incompatibility with Miss Blanche, and Vivien Leigh somehow manages to preserve Blanche's bubble-like fragility amid the chest-heaving histrionics, the wanton musical accompaniment, and the florid, lurid look given to the stagy sets. With Kim Hunter, Karl Malden; directed by Elia Kazan. 1951.