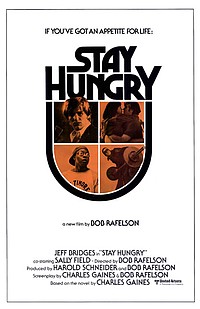 The sole survivor — and notorious bad penny — in a family of landed gentry outside Birmingham, Alabama, cultivates an interest in the hangers-out at the grubby Olympic Spa gymnasium, which is bristling with excitement as the resident muscleman, an immigrated Mr. Austria, trains in secret for the upcoming Mr. Universe contest. (The physique of Arnold Schwarzenegger, a bona fide Mr. Universe, is kept under wraps until the finish; and his long-awaited unveiling is no disappointment.) As in director Bob Rafelson's Five Easy Pieces, the privileged hero, exercising his inherited freedom of choice, turns his back on the American Dream, which in this case is made up of colonnaded mansions, country clubs, fancy-dress balls, and cutthroat capitalist enterprise. There is, all the same, an unmistakable wish-fulfillment at play in this tale, and also a kind of reverse social striving ("You sure got some peaked-looking relatives," observes the healthily sun-tanned, eternally perky Sally Field). Rafelson is less than a probing social analyst; he tends simply to go along with the tide. Yet he is, as a result, a fairly reliable weathercock of current biases and sentimentalities. The gymnasium itself, with its elaborate and elegant body-building contraptions, and also the backwoods moonshiner's retreat, are well-chosen and strong-smelling subjects; and it's a pity that Rafelson gives them only a glancing treatment. He does better — perhaps because of his natural cursoriness — at keeping tabs on the large and diverse cast of characters, ranging from top to bottom across the entire social scale. With Jeff Bridges, R.G. Armstrong. 1976.