The Spy Who Loved Me 1.0 stars 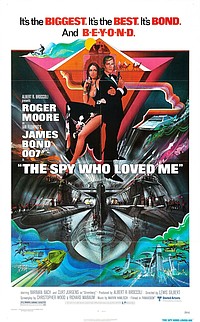 A scrapbook of earlier Bond escapades. It takes the skiing chase from On Her Majesty's Secret Service, the underwater stuff from Thunderball, the fight in the train compartment from From Russia, with Love, the supposedly unassailable criminal fortress and the commando takeover of same from You Only Live Twice. It even stoops to borrow a gimmick involving a giant crane-operated magnet from the Matt Helm series -- one of James Bond's idiot offspring. Lewis Gilbert's direction is smoothly efficient, and Claude Renoir's color work consistently fine -- it has the light, luscious look of French pastry. But in general, this simpering, featherheaded, imitative installment continues the series' trend toward emasculation -- this Bond ought to have his double O's removed. Roger Moore, Barbara Bach, Curt Jurgens, Caroline Munro. 1977.