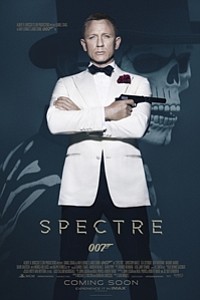 In his fourth outing, Daniel Craig's iteration of superspy James Bond takes his undersized suits, hangdog expression, and psychological damage on an epic, eye-popping, worldwide hunt for...closure? (The personal and political are pretty much identical here, and a spectre is, of course, a ghost — the sort of things that refuses to die and instead haunts the living.) It's very much a continuation of 2012's Skyfall: director Sam Mendes still knows his way around a grand-scale establishing shot, info-terrorism is still the threat, Mi6's allegedly outdated 00 program is still the issue, and family of one sort or another is still at the heart of everything. There are signs of Bond bloat within many of the action sequences — it must be hard to trim such extravagant footage — but they are at least partly overcome by an increase in levity. Some funny bits are obvious: landing on a couch after sliding off a building. Some are less so: a woman falls asleep in her dress after threatening to kill Bond if he comes near her; when she awakens, she's wearing a satin nightgown and her attitude is similarly changed. Most are welcome. Shockingly, it's the villain, played by Christoph Waltz, who disappoints. He lacks previous baddie Javier Bardem's wicked relish, and his aim is pretty lousy. 2015.