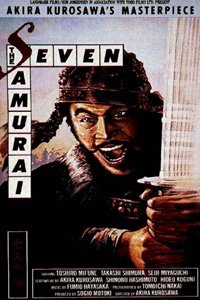 Kurosawa's inspiring action film — inspiring particularly to John Sturges's The Magnificent Seven — about a loose-knit team of free-spirited, unemployed samurai who are hired for pittance to defend a farming village against the local huns. The movie itself could be called loose-knit too; but because the action scenes, like the characters, are wonderfully varied and energetic, it is one of the least tedious three-and-a-half-hour movies in existence. Takashi Shimura, Toshiro Mifune. 1954.