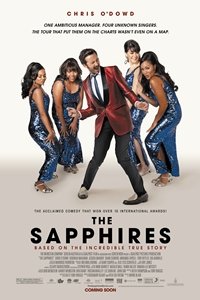 A feel-good movie that gets the job done, thanks in no small part to the enormous appeal of its star, Chris O’Dowd. As Dave Lovelace, a failed cruise ship director reduced to hosting talent shows in a local pub, O’Dowd is the blackest, most soulful “gubber” in all of New South Wales. He finds redemption (and a meal ticket) in the form of an aboriginal sister act (Deborah Mailman, Jessica Mauboy, Miranda Tapsell). The three siblings are later joined by Kay (Shari Sebbens), a talented vocalist whose light skin has caused her to spend years trying to distance herself from her cousins. Eventually, Uncle Sam sends the girls to entertain the troops in Vietnam. Given the context, subplots involving racism, oppression, and romance are as unavoidable as performance numbers. But all of these frequently burdensome themes are interwoven with nary a trace of condescension or sermonizing. Sentiment, however, is unavoidable. 2012.