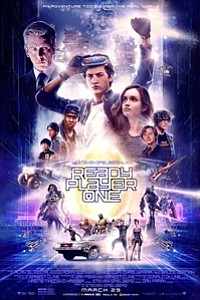 Steven Spielberg goes back through the future with the story of Wade Watts (Tye Sheridan, looking not unlike a young version of the director), a Willy Wonka for his time. He’s a poor kid from the stacks in 2045 Columbus, but he’s super-good at gaming, so there’s hope that he’ll be the one to find the golden ticket — in this case, the three keys that will gain him ownership of the world’s biggest company, which just happens to control the virtual world in which he (and everyone else) spends his time. (Why? Because, as Watts puts it, “Reality is a bummer.”) That world, the OASIS, is the brainchild of a pop-culture junkie with a taste for the classics, and so much of the movie’s fun amid the relentless action comes from spotting old favorite stuff — hey, it’s the old Batmobile! or the sphere of annihilation from Dungeons & Dragons! — and rejoicing in the appearance of old favorite characters. Life in the OASIS is exciting and wondrous to behold through your avatar’s oversized anime eyes, but it doesn’t mean much without some real-world stakes, and that’s where the film stumbles, badly. It seems the evil boss wants to…place ads in virtual reality? And that he runs a hi-tech (and apparently legal) debtor’s prison right under his executive offices? And that reality, bummer or otherwise, is the only place where you can get a decent meal? Well, okay then. 2018.

It's almost like you didn't watch the movie considering people getting killed and chased down to be murdered or imprisoned doesn't count as "real world-stakes." Also I think the bad-guy owning a large corporation wanting to have ownership over the largest industry by far in the world makes perfect sense, even if the specific example of covering 80% of vision with ads was lame but I feel like it's still realistic. I do agree with you completely on lack of a legal system after IoI and feel it's a good complaint but complaining about big anime eyes and easter eggs of video games seems counter productive considered the movie's main premise is the vr world experience, which I think they portrayed really well. My main complaints are the lack of legal system, lack of music or a good soundtrack during lots of actions scenes, and the vagueness of the mystery elements to getting the keys and the creator of the Oasis. I wish you would make complaints such as these and not that there's video game references in a video game movie.

Like the first comment said it’s as if you didn’t even pay attention to the movie. Not having “real-world” stakes is far from the truth as the people who found the easter egg would become the richest person in the world and control basically the OASIS which runs the whole world in that time. I don’t know how you became a movie reviewer when you clearly lack in paying attention.