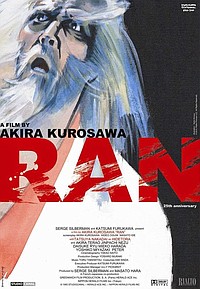 The happy coincidence of an actual old man (Akira Kurosawa, age seventy-five) electing to do a treatment of King Lear opens plenty of room to read things into it, and thereby to overrate it. The familiar story, freely altered to fit into the samurai genre, even down to a sex change in the three contentious offspring, retains all of its universal potency, and perhaps even picks up some extra, from the traditional Japanese perspective, in the characterization of the shockingly violent and emasculating warrior's wife, soon his widow, sooner again his brother's wife. (Great detail: her taking time out from sham weeping to crush a wayward moth, and without missing a sob.) But the movie is still rather surprisingly slow and static to have come from one of the past trailblazers of the kinetic. Its untainted showpiece is the battle scene that precipitates the protagonist's "madness," a jagged mosaic of the horrors of war, with startlingly beautiful effects from a pretty-pink fusillade of gunpowder flashes or a shower of flaming arrows, and carried on for at least half its length with no sound effects at all, only a thick blanket of Brucknerian music. This scene alone, beyond such a standard measurement as being Worth The Price Of Admission, proves conclusively that Kurosawa has not lost so many faculties as to make him fair competition for the mob of moviemakers. And in that sense one certainly ought to be careful not to identify the director too closely with his central character. Tatsuya Nakadai. 1985.