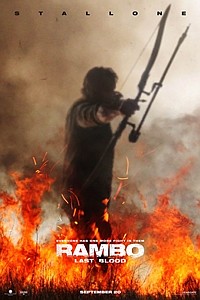 The real war right inside your own multiplex door continues. Instead of the interminable set-up, a simple title card, reminiscent of a ‘30s serial, would have set the scene nicely: “Following the kidnapping of his niece by a gang of drug-dealing Mexican rapists (some of whom we assume are good people), John Rambo answers the call to action and…” The wall hasn’t been built that’s large enough to keep JR (Sylvester Who Else?) from enacting revenge, which he does in a manner befitting a Rob Zombie gorefest, not at all like the disciplined killing machine we’ve grown to love. There’s more enjoyment to be had in watching our hero construct and maintain his secret, methodically engineered catacombs (built for just such an occasion beneath his Arizona ranch) than there is the resulting massacre. Add to the unpleasantness more dialogue from Johnny than you heard in the first 3 pictures combined. (I like my Rambo animalistic and near mute.) And just how the hell did Paz Vega’s character gain such easy access to the gangster enclave? As a fan of the series, I wished for a stronger sendoff with a lot less comic book splatter. 2019.

Wait, Mr. Marks, YOU, my cinema censei, a self-proclaimed fan of the series??? You mean you were a Reaganite in the 80's???

Better Rambo than Rocky. Brian Dennehy and Andrew Laszlo contribute to FIRST BLOOD's masterpiece status. It's one of the most intelligently written and directed action films of its decade. The rest are fun popcorn pictures.

What??? While the first one was . . . okay, but predictable (stereotype of outcast itinerant loner, in this case a Vietnam vet), to call it a "masterpiece" is beyond my comprehension!!! A man named Collins wants to talk to you!!!

You call racist right wing Cold War chest-thumping propoganda "fun popcorn pictures"??? I should have known from your love of Fuller that you were a staunch anti-communist during the Cold War, but never figured you for liking culturally chaunvinistic, racist crap!!! (And you dare lecture me on Gibson??? Grrr.) Now with the new post-Cold War geriatric Hambo, we have a Trumpian revenge fantasy about the Jungian Other and you are okay with THIS!!! Isn't it odd that Hambo never goes after the Cosa Nostra and kills a paisan or two???

I am very disillusioned in my cinema sensei.