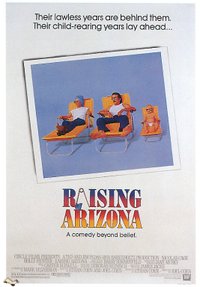 The Coen brothers, in their second movie, have taken great personal strides. No longer trying to walk the thin line between pastiche and parody that so held them back in Blood Simple, veering off instead into the woolliest wilds of their combined imaginations, they — director and co-writer Joel and producer and co-writer Ethan — turn out to be very funny guys. The premise, which along with the opening credits takes a while to materialize, gives us a couple of young but barren newlyweds — he's a small-time crook and several-time loser, she's a former police mug-shot portraitist — who would do anything to have a family of their own, even kidnap one of a highly publicized group of quintuplets. (Surely one wouldn't be missed.) The whole thing feels rather as if a couple of characters from a Terrence Malick film (the hero even adopts the literary-naif style of narration: "At first I could not believe that this woman, who looked as fertile as the Tennessee Valley, could be barren" and "The doctor explained that her insides were a rocky place where my seed could find no purchase") had been swooped down upon by Martin Scorsese's cameras and Ma and Pa Kettle's gag writers. Rather like that, but rather better at every point of comparison. And cartoons, actually, are the more proper touchstone. Where Terry Malick might legitimately be arraigned on charges of condescension, the Coen brothers are scarcely more culpable on that count than the creators of Elmer Fudd, Wile E. Coyote, and Sylvester the Cat. And nowhere outside of the Warner Brothers cartoon factory in its heyday will you find a greater gusto, a cinematically purer gusto, for the compositional comicalities of point of view, perspective, scale, distance, etc. The movie camera needn't be just a passive bystander to witness funny people doing and saying funny things — as in a TV sitcom or Chaplin "classic." And it is a great deal more than that to the Coens. With Nicolas Cage and Holly Hunter. 1987.