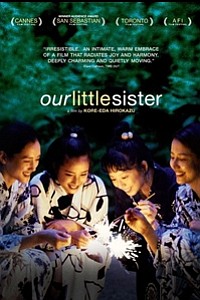 At their estranged father’s funeral, the oldest of three sisters takes it upon herself to ask her little-known teenage half-sister — the product of an adulterous relationship that “crushed their family” — to join her siblings and make it a quartet. Was the invite extended simply to spite their almost equally disunified mother? Audiences softened by Hollywood cynicism are bound to be confounded by filmmaker Hirokazu Koreeda’s (After Life, Like Father, Like Son) gentle, upbeat tone. The director’s prime influence Yasujiro Ozu notwithstanding, it clearly doesn’t take a superhero to resolve life’s endless flow of contradictions, nor does our titular outcast in the sailor’s suit transform into a stringy-haired Japanese demon. Koreeda instead looks at what holds a family together long after the sands of time have filled in the emotional crater left by a messy divorce. And don’t expect a conventional sappy ending. If anything, the poster should read, “See it without Kleenex!” 2015.