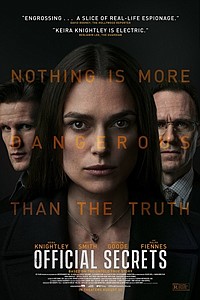 The most famous female whistleblower this side of Erin Brockovich finally gets her day in the multiplex. Guilty or not guilty? Before Katherine Gun (Keira Knightley) can cop a plea, we flashback to the year-long terrorization of the young translator whose biggest sin was blowing the whistle on the Bush/Blair crime syndicate over wrongfully plunging the world into a war she considered illegal. It takes a bit of time for the actress to get up to speed: Gun may not think what she’s doing is wrong, but paranoid, furtive-eyed Knightley sure acts like it. As is often the case in movies wherein docile females are married to men of action, the character of Gun’s husband Yasar (Adam Bakri), a Muslim eventually jailed for his wife’s doings, is tolerably underdeveloped. Thankfully, the suspense isn’t, as director Gavin Hood spends the final half laying on the tension. The chances of this film resulting in the jailing of Bush and Blair is unlikely. Sadly, we now have oranger fish to fry. Do yourself two favors: see the picture, and if you’re unfamiliar with the outcome of the case, avoid the Google before purchasing a ticket. It’ll make for a much more nerve-wracking time at the movies. 2019.