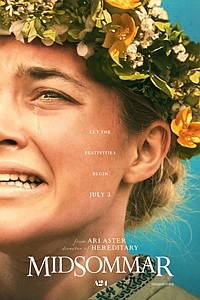 What the opening murder/suicide of Dani’s (Florence Pugh) parents and sister brings to bear on the Swedish vacation that follows is negligible. It’s included mostly because writer-director Ari Aster (taking a backward-step after the chilling Hereditary) thought it would be cool to start in the garage and follow a tube connected to the exhaust pipe as it winds its way inside the house and up the stairs to the master bedroom. Joining Dani on the trip are a quartet of depthless, under-written putzes looking to get high and get laid. Their destination is a menacing Ricola commercial universe where the sun never sets, presumably because terror is more terrifying in broad daylight. I am all for a horror satire that posits an inbred, mentally defective child as the god of a group of Clorox-white religious zealots. But instead of a balls-out political satire, Aster follows a long-winded, 140-minute route that eventually settles on sex and gore as a substitute for meaning. Don’t let the studio-manufactured hype fool you; this is a midsummer’s matinee bore. 2019.