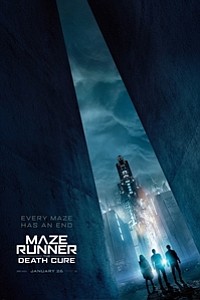 Director Wes Ball’s final installment of this YA dystopia trilogy about a zombie plague-ravaged world, the plucky teens lucky enough to be immune, and the desperate scientists who want to harvest that immunity by any means necessary is... not great. But it’s better than it has any right to be, given the genre’s exhaustion, the lameness of Chapter Two (The Scorch Trials), and the three-year delay between that film and this. Most of the credit goes to Ball, who infuses the rescue-mission plotline with enough verve and momentum to keep the silly bits from sinking in, while avoiding other silly bits altogether. But there’s also something to be said for the script, which doles out just enough data to remind us why we should care, mostly manages to convey feeling without getting goopy, and even ekes out some stubborn complexity. And the cast, led by Dylan O’Brien, is gamely sincere. 2018.