The Man Who Saw Too Much 3.0 stars 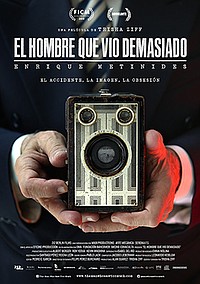 Trisha Ziff directs this engrossing account of real-life nightcrawler Enrique Metinides. The tenacious photojournalist — he’s devoted his life to purposefully placing himself in the wrong place at the right time — has been taking official police photos since age nine. (As a child, it was not unusual for him to witness 30 to 40 corpses a day.) Having just turned 94, Mexico's answer to Arthur "Weegee" Fellig is the spitting image of Joe Pesci, the actor who played the legendary street photographer in the biopic The Public Eye. We begin, fittingly enough, at the corner newsstand, a once vital hub that, in the era of iPhone journalism, is as outmoded as a flashbulb. With but a single frame to work in, Metinides economically draws his camera back so as to tell the entire story in one picture, all the while finding narrative support in the faces of the flabbergasted onlookers. 2015.