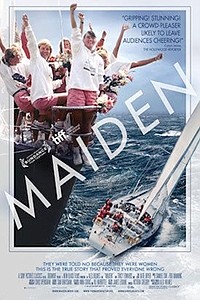 Another week, another “shoot now, figure it out later” celebrity biodoc. Tracy Edwards sailed ‘round the world with an all-girl crew, competing for the Whitbread Cup in the longest race on earth. Edwards learned at an early age that when it came to earning a living, women had no place in a man’s world. No matter: starting as a cook, Edwards wouldn’t quit until she was allowed to take to the seas as a proper sailor. Her achievement was groundbreaking; the documentary retelling, not so much. If only director Alex Holmes’ ability to commandeer a story was one-tenth as ambitious as his lead character. The nine-woman crew worked harder to find a sponsor than Holmes did a visual through-line. Talking heads narrate silent footage underscored by tension-mounting music: it’s the stuff television is made of. (One shudders to think how much worse things might have been had someone forgotten to pack a 16mm camera.) 2018.