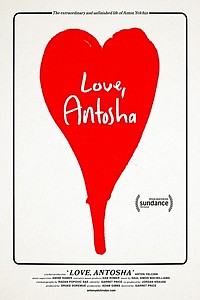 The title for Garret Price’s documentary about gone-too-soon actor Anton Yelchin is carefully chosen. It’s how the immigrant's child closed his frequent and heartfelt letters to his fiercely devoted mother Irina, and the film plays a bit like her loving reply: a tribute to the son whose grave she still visits daily. Together with Anton’s father (and her Ice Ballet skating partner) Viktor, she fled anti-Semitism in the Soviet Union to give her baby a better life in America — only to see him diagnosed with cystic fibrosis. Not that it slowed him down much — besides acting in seemingly everything he possibly could (Smurfs, Green Room, Star Trek, etc. etc.), Yelchin found time to study vast swaths of film history, learn guitar and join a band, engage in photographic explorations of the Valley’s bent-sex outskirts, translate Russian literature, and generally, as he put it in one of those letters to Mom, “explore the existential nature of our existence.” There is a sense within many of the admiring celebrity interviews that the man’s promise as an artist had not yet been realized, and so the the words of appropriate tribute remain just out of reach. But the admiration is genuine: when grand old man Martin Landau calls him “an old soul,” it’s clear he means it. And thanks to his mother’s devotion and his prolific career, there is plenty of footage — camcorder, iPhone, TV, movie — to keep things moving. 2019.