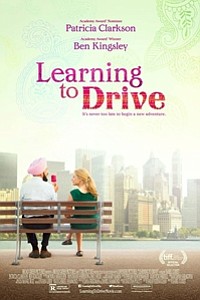 Patricia Clarkson (Cairo Time) stars as a recently ditched book critic bumping up against the fact that she never learned to drive. (She had a husband for that.) Ben Kingsley (Night at the Museum: Secret of the Tomb) co-stars as a recently arrived Sikh driving instructor/taxi driver who never learned to love. Together, they have so much to learn, and the operation of an automobile provides so many opportunities for metaphor. It's not Clarkson's fault that Kingsley fares so much better here: her character is called upon to emote in so many directions that she barely registers as a person, while he is allowed to operate at the level of suggestion and suppression. And it's not Kingsley's fault that Clarkson will generate all the buzz, thanks in part to some frank sex talk and in part to her graceful embodiment of the target audience. Director Isabel Coixet (Elegy) is generous in her portrayal of immigrant culture (the scenes in the Sikh temple especially) and indulgent in her depiction of memory and fantasy. 2015.