The Last Temptation of Christ 3.0 stars 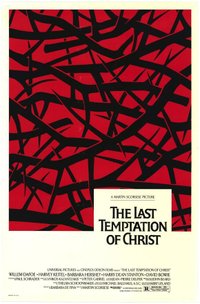 What Martin Scorsese and company (scriptwriter Paul Schrader, quite prominently) appear to be up to at the most basic level is something that storytellers have been getting up to since the birth of the oral tradition: retelling a standard-repertory myth and altering it in the telling. (In this case using as the closest take-off point the 1955 Kazantzakis novel of the same name.) And the simplest point to be stressed about it is that with a story as chewed-over as this one — a story, as we've witnessed in such cinematic recountings as Stevens's The Greatest Story Ever Told and Nicholas Ray's King of Kings, with a tremendous potential for disseminating boredom — it was a formidable narrative challenge that Scorsese was taking up. And it is a challenge well and bravely met, at least at first. However, the inventiveness of the first hour goes into a bit of a decline, and the intense focus on the struggle between the protagonist's human and godly sides begins to blur, once this Jesus comes more into line with tradition, performs some miracles, etc. And the final Crucifixion scene, with Jesus's ambiguous "vision" of What Might Have Been (marriage, fatherhood, ripe old age), blurs the focus of the first hour of the movie in a different way from the middle section. It goes off too completely (or for too long) on the purely human track, and it deviates so far from the standard storyline that it cuts all lines of tension between the familiar and the fresh. Maybe the narrative challenge was too formidable. Willem Dafoe, Harvey Keitel, Barbara Hershey. 1988.