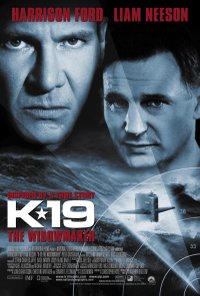 Fact-based story of a near-miss nuclear disaster aboard a Soviet submarine in 1961. (A companion, of sorts, to Thirteen Days.) Full of Russian fatalism, isolationism, and hugger-muggerism, in addition to clenched muscles, sweat, and merciless music. A grind, but not unbearable. The only comic relief comes in the coda: the twenty-eight-year reunion of the survivors, all of whom (even those who were rookies at the time) are done up in gray wigs and old-age makeup. With Harrison Ford, Liam Neeson, Peter Sarsgaard; directed by Kathryn Bigelow. 2002.