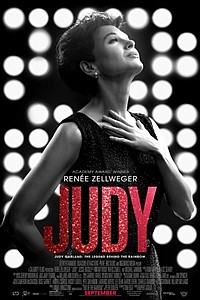 The last year of her life finds a strapped Judy Garland leaving her kids behind while she embarked on a six-week concert tour of Britain. Director Rupert Goold was fortunate to have for his cinematographer Gabriel Yared (Every Man for Himself, The English Patient). Yared, who clearly understands the parameters of the period, does a bang-up job finding just the right shade of soft, early-’60s British Technicolor to cast across Kave Quinn’s evocative production design. (A compressed telephoto shot of diminutive Judy surging upstream against a torrent of leggy showgirls stayed with me for days.) With the exception of the occasional bout of Jim Bailey trout pout, Renée Zellweger’s Garland captures the look, but did they have to let her sing? One note from her throat splinterizes the illusion. (Don’t take my word for it. Watch the trailer.) What’s the shame in lip-syncing, particularly when there’s not one moment where Zellweger comes close to touching the deep, damaged fragility of Garland’s voice? 2019.