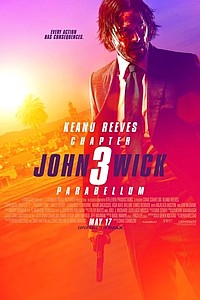 By this point, director Chad Stahelski’s franchise about Keanu Reeves’ hitman with a heart of gold (Wick’s reasons for killing the hundreds of assassins after his head this time ‘round are entirely romantic) is completely besotted with itself and the world it’s created. Its hefty borrowing from Catholic bureaucracy: disgraced members of its simultaneously decadent and decaying world are excommunicado, decommissioned sanctuaries are deconsecrated, a High Table curia sends adjudicators to keep order in the outposts by assigning penance for sins committed. Its loving attention to firearms, bullets, and the near-incessant necessity of transferring the latter into the former. Its even more loving attention to brutal, impressive, but ultimately exhausting hand-to-hand combat. (Exhausting for the viewer, anyway; Wick hardly ever stops to catch his breath.) And by this point, it’s counting on you to be similarly besotted, so that you’re happy to play along with the silly bits (there are a number of them here, several involving a super-assassin who’s also a total fanboy), the unlikely bits (why don’t these guys shoot him when they have the chance instead of relying on knives?), and the kind-of-pointless bits (Halle Berry and her crack coterie of combat canines). Etc. etc. It’s rather like when Bond films went from Sean Connery to Roger Moore: you know and love the brand, so now we can goof around with it. Plenty of people will find this copacetic. A few will grouse about what’s been lost in the process: a touch of the real amid the merely fantastic. 2019.