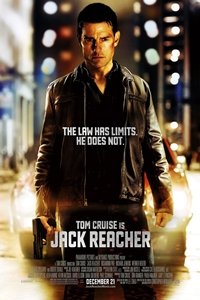 "A Tom Cruise Production" —it's the first thing you see on the screen, and it's all there is to know. Here, he plays Jack Reacher, an invincible, invisible genius who appears out of the mists of cliche to investigate a rogue sniper's shooting spree. (The opening scene, in which a rifle scope follows first one pedestrian and then another and then another, is both chilling and promising, as is the dialogue-free investigation that follows. Then suddenly, we're deep in TV procedural territory.) Reacher teams up with the sniper's lawyer (Rosamund Pike) who we're told is a smart crusader-type out to beat her dad the death-penalty DA, but whose real job is to have boobs and listen, open-mouthed with both desire and amazement, as our hero tells her what's what. The only parts that aren't formula are just weird — most notably, a Stooges-style attempt on Reacher's life by a couple of clumsy thugs. You might find some joy in Robert Duvall as a crusty gun range owner, or in Cruise's gradual demolition of a beautiful muscle car during a drawn-out chase scene. And there are a couple of jokes. But not much else. 2012.

Sad because those Reacher mysteries/novels are some of the best reads in the genre today. Oh, the improbability of this guy traveling Lone Ranger-style around the US has to be set aside, but after that the stories can become most engaging. Even some rather improbable plot lines seem to take on a life of their own, and can hold attention in spite of some weak spots. But a movie? A Tom Cruise movie? Oh please! Tom Cruise as Jack Reacher? I don' theenk zo, Senor. Not after some of his other efforts, such as whatever they called it, Lions for Lambs, or Lambs for Lions, or . . . what the heck. L'il Tommy just ain't a tough guy, and Reacher is the penultimate tough guy.