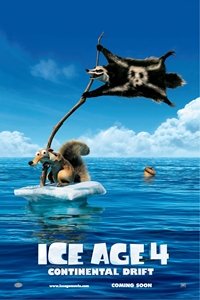 There are three good things about this film. One, Scrat's relentless pursuit of acorny pleasure. Two, Sid the Sloth's venture into physical comedy when he eats a berry that leaves him a paralyzed bag of jelly. Three, the adorable army of hyraxes, never mind the silly blue facepaint indicating battle-ready ferocity. Everything else is an exercise in crass commercialism and simpleminded storytelling. No plot point goes unexplicated, no character dynamic goes undeclared, and it's a rare joke that lands with anything but a dull thud. Plus there are pirates, because kids love pirates, right? Maybe next time, they'll send Manny & Co. into space! 2012.